As a critical market-mover in this week’s trading activities, JPMorgan Chase (NYSE:JPM) reported earnings that beat analyst estimates on a variety of important fronts, and these performances could send shares of JPM higher before the end of 2020. 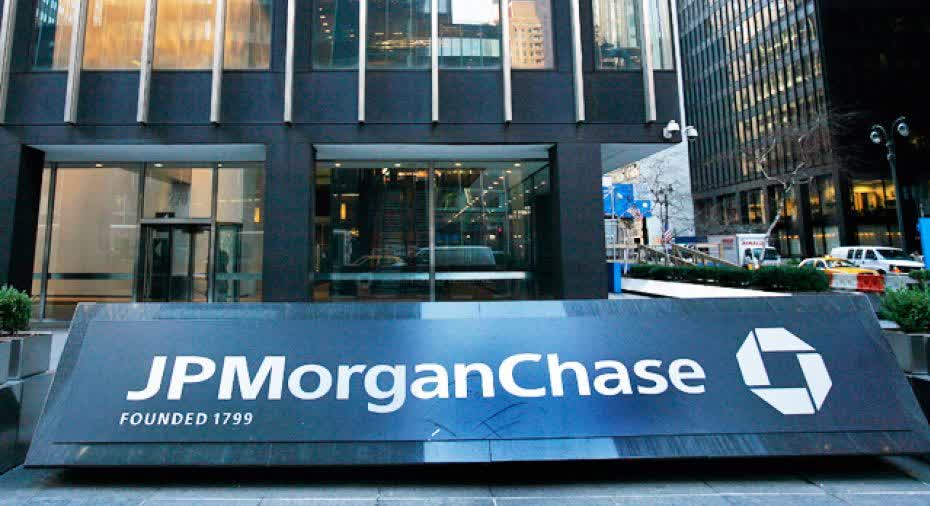 In our view, strength was visible for JPMorgan’s top line and bottom line in this latest earnings release. However, revenues from the bank’s trading segment were particularly impressive, and this is where income investors should be focusing most of their attention in upcoming trading sessions.

Overall, JPMorgan’s favorable earnings release has helped the stock solidify its footing above $100 per share, but if we see a downside breakthrough support levels above $97.50, our outlook will turn bearish and target further declines before the beginning of 2021.

For the third-quarter period, JPMorgan Chase reported $9.4 billion in profits (giving us an EPS figure of $2.92). Fortunately, this performance beat analyst expectations (calling for an EPS figure of $2.23). Revenues came in at $29.9 billion (beating analyst estimates by roughly $1.5 billion), and we believe that these favorable results are based largely on the bullish performances generated by trading activities associated with the bank. 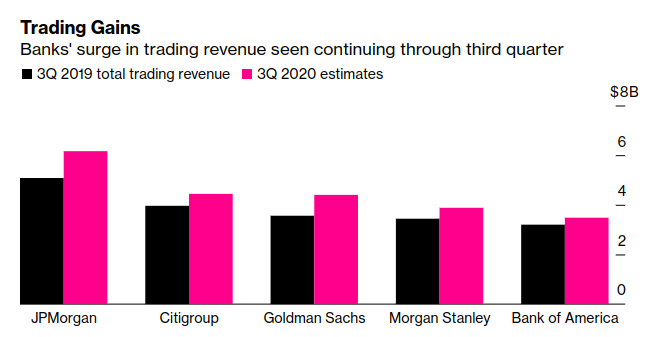 Prior to this week’s earnings release, the market’s consensus estimates showed that JPMorgan was a clear favorite to outperform in these areas. Trading revenues were expected not only to surpass 2019’s performances by a wide margin but also outperform with respect to key industry competitors like Citigroup (NYSE:C) and Morgan Stanley (NYSE:MS). Fortunately, JPMorgan Chase lived up to these expectations and posted trading revenues that were quite impressive during the period. 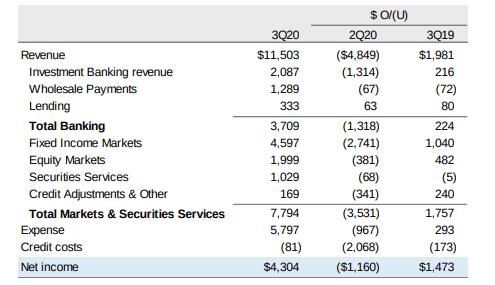 As we can see, JPMorgan Chase generated $2 billion on the equities side and $4.6 billion on the fixed income side. Given the massive influx of volatility that has been present in the market over the last several months, it might not be surprising for investors to see a massive surge in financial trading activities. However, it’s clear that JPMorgan is delivering on this end with its ability to beat expected trading revenues of $1.7 billion for equities and $4.5 billion on the fixed income side.

The Federal Reserve’s prior decisions to support credit markets were largely unprecedented, and these factors have had a significant influence on the 2020 trading revenues that have been generated by banks like JPMorgan Chase. As a result of these events, revenues from the trading segment have beaten JPMorgan’s own forecasts by a wide margin (with annualized gains of roughly 30%).

Going forward, it will be important for income investors to identify stocks in the financial sector that are associated with banks that are unlikely to need additional money in the event that we see a new surge in loan defaults in the post-coronavirus economy. According to the reported figures that were just released, it appears that JPMorgan Chase might be near the end of the line in this regard.

Specifically, JPMorgan Chase showed its provisions for credit costs at just $611 million (which follows figures of $10.5 billion reported during the second quarter period of 2020). For the first half of 2020, JPMorgan placed a great deal of focus on building reserves for potential loan losses. However, it now appears as though the bank’s strategies have changed, with respect to its preparations for the post-coronavirus economy.

During the third-quarter period, JPMorgan Chase managed to reduce its reserves for loan losses by $569 million. If we are judging this activity based on the strategies that were in place during the first-quarter and second-quarter of 2020 (when a total of $15 billion was added), we can see that the bank is clearly changing course. Income investors should expect some readjustment here in share prices because it is clear that these are not trends that Wall Street was expecting.

On a YTD basis, shares of JPMorgan Chase have fallen by nearly 30%, but there is already evidence that the stock has initiated a bullish reversal. In fact, this type of bullish move might be possible for the entire financial sector, given the level of undervaluation that appears to be present when compared to the broader market. Specifically, the KBW NASDAQ Bank Index (BKX) is currently showing multi-decade divergences when compared to the value of the S&P 500:

CEO Jamie Dimon added key comments the bank’s quarterly results, which indicated that JPMorgan’s total loan loss reserves have no seen significant changes when compared to the results reported during the previous quarter (at less than $35 billion):

JPMorgan Chase earned $9.4 billion of net income on nearly $30 billion of revenue and we maintained our credit reserves at $34 billion given significant economic uncertainty and a broad range of potential outcomes. We further strengthened our capital and liquidity position, increasing CET1 capital to $198 billion (13.0% CET1 ratio, up 60 basis points after paying the dividend) and liquidity sources to $1.3 trillion.

The Corporate & Investment Bank continues to be a big driver of Firm performance with Markets revenue up 30% and Global IB fees up 9%. CIB and Commercial Banking continue to attract and retain deposits given our strong client franchise as our clients remain liquid. Asset & Wealth Management generated record revenue and net income and saw strong net inflows into long-term products.”

Shares of JPM appear to be finding strong support buying near the upper 90s, and the bank is trading well below its post-coronavirus highs. This is where the moving average cluster that is represented above by the Ichimoku cloud has contained prices during the collapse in stock markets that began in March 2020.

Ultimately, these declines in share prices have sent valuations into much cheaper territory, and JPM is currently showing a price-to-book value of 1.314x. Of course, this is well below the highs above 1.85x seen earlier this year, and we think this makes the stock an excellent consideration for new bullish positions.

Thank you for reading. Now, it’s time to make your voice heard. Reader interaction is the most important part of the investment learning process. Comments are highly encouraged! We look forward to reading your viewpoints.

Disclosure: I am/we are long JPM. I wrote this article myself, and it expresses my own opinions. I am not receiving compensation for it (other than from Seeking Alpha). I have no business relationship with any company whose stock is mentioned in this article.

Share on FacebookShare on TwitterShare on PinterestShare on VKontakte
adminOctober 17, 2020

Episode #280: Matthew O’Connor, AdQuick, “People Use The Term Disrupt All The Time…And I Like To Think We Can Kind...

Dr. Anthony Fauci on Sunday that Johnson & Johnson and AstraZeneca could send studies of their COVID-19 vaccines to the...